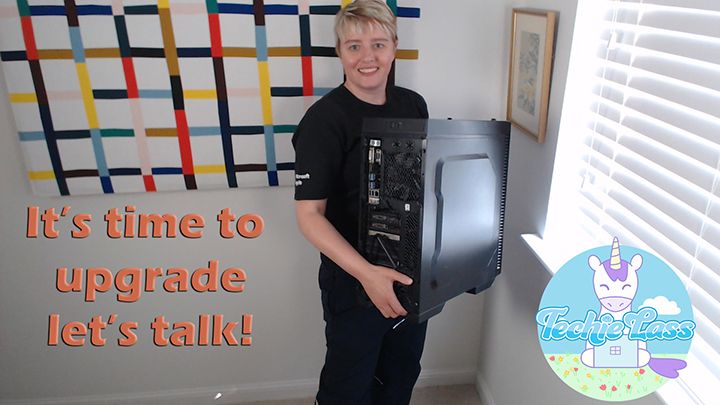 Four or five years ago I built myself a new desktop PC, it was built for my photo editing and my husband's gaming needs. At the time I remember spending a lot of money on it, and back then it ran fine. It was a beast in terms of spec but it had enough grunt that did what I wanted it to do and has served me well over the years. However, over the last year I've noticed it's gotten slow, it's gotten a bit temperamental. Below is the spec I am currently running and I found some of the prices I paid for this!

I've put off spending the money on a replacement as I don't use it that often anymore and this time last year we moved into a new house so we've been concentrating on housey, grown up stuff. However, with the current lockdown situation due to COVID-10 my husband has been gaming again and I've been doing more and more video/graphic editing and sometimes have to put my work laptop (Surface Book 2) to the side while it renders videos and use my home PC to do some work stuff and the lack of grunt in it is starting to frustrate me.

Spending a lot of money on a new PC isn't something I want to do, however I want to ensure I value for the money I do spend and that I am not going to have to replace it all again in a year or two by going to cheap.

I ran through my thinking and the list of parts on a YouTube live stream earlier today, which you can view here:

However I've also listed out my thinking below:

CPU
I'm a Intel fangirl, I've always built my machines around that but this time I am going AMD, I think the performance and price that they offer now is a winner. I originally looked at the AMD 2700 which is the previous generation processor but after looking at it the 3700, the current generation offers good value for money. As well as giving me 8 cores and 16 threads. My current CPU is 4 cores and 4 threads, so definately an improvement. Video rendering uses the CPU quite a bit so this should be beefy enough without breaking the bank.

CPU Cooler
You'll notice I don't have a 3rd party cooler in my list. I've toyed with the idea of getting one and might do in the future, but the stock AMD coolers are pretty good and will certainly run find for me right now. Over time I might have to upgrade and it might be sensible to do so, but I shall run stock for the time being. Which is a chance as I haven't ran stock coolers for a long time, but then again Intel don't seem to supply good coolers, AMD seem to.

Motherboard
When you look at systems others are building they revolve around the MSI B450 range. It seems a solid board that offers good performance and works with the AMD 3000 CPU series. I've went for the Gaming Pro Carbon version as it has Wi-Fi connectivity built directly in, so I don't have to go and add an another component to give me that functionality.

Memory
I've went for 32GB of RAM here, because when you look at some of the system requirements for Adobe Creative programs such as the Premiere Pro they say the recommended is 16GB or more. So these are beefy programs, and if you want to have a browser open or play music in the background you can suddenly start to hit a dead end. I've chosen Team memory as again, you see a lot of people building systems with this brand and it seems to offer a good level of speed, capacity and some lights for a good price point.

Storage
I've got a mash of storage going on here. I've chosen a Toshiba M2 drive as the one for my Operating System (Windows 10) install, most people will go with the Samsung 970 EVO M2 drive, and I did have that on my list initially but after reading the specs and viewing the price point I thought it was a little expensive. The Toshiba is only a little slower in terms of read speeds and although much slower on write speeds, it's still a very reasonably price drive and I doubt I'd really notice the speed difference.

I've also got a SSD in here for a working drive, where I can get some fast storage. And I've also got an old HDD there for storage needs. Just to keep things, cause we all hoard right. 😂

Video Card
In my current setup I have a NVIDIA GeForce GTX 970 card, now it's not the most powerful and I actually bought it second hand when the hubby complained Football Manager needed something better to play some of the 3D match views he was using. And to be honest the card has done a good job for our needs.

I probably do need to upgrade it and get something that is a bit more powerful, but graphics card are a bit of a minefield. What I know is that I have a good system around it and when I have a bit more £££ and understand my needs a bit better I can go and hunt for something else.

Case
My case isn't the most exciting but cases have never really excited me and I'm not one of these people who love to have lights showing in the case, albeit this case has a clear side and some of my components have RGB lights built in. This case ticks my boxes, it has 5.25 drives, 2.5 drive space, cable management features, and a place for the PSU to sit comfortably.

The case only has 1 fan that is included with it, but there is space for more fans. I'm going to order 2 other fans to build into the case and if I need more I have a bunch in the current case I can remove and use then maybe purchase something new/better later once I understand what I need.

DVD Drive
One of the games I play, Farming Simulator was purchased as a traditional box and DVD, so I need a DVD drive for that. I've got one in my current set up, so I will take that and use that.

Overall with some bargain hunting and reusing parts, I'll come under £1000 with this build. Which is where I wanted to be. Hopefully I can get all the parts and get it up and running.