I had the pleasure of attending the inaugural ChefConf held in London last week. It was a two-day event happening in the center of London, a mini version of ChefConf that ran in Seattle, earlier this year for those familiar with that event.

For those not familiar with who Chef are, they are a company that own a configuration management software by the same name. Traditionally Chef only supported Linux but it now supports Windows as well. The software can help companies keep a consistent server estate and create repeatable patterns.

The event was being held in etc.venues St Paul's which is an easy venue to get to via the London tube system and a housed in a lovely building. The conference set up was great, can't fault it to be honest.

The day started with some networking in the networking area with some colleagues and grabbing some stickers and brekkie. It was a nice way to start the day off and there was a lovely vibe in the networking area. I've been to a lot of user groups, events, conferences, etc over my time and it's hard to describe but some events just have that lovely friendly vibe. It was also easy to spot this was a technical event, people who cared and were interested in technology where in attendance.

The first session on the agenda was the keynote by the CEO of Chef, Barry Crist. Sometimes these opening keynotes, can just be filler items on the agenda but I really enjoyed this one. He highlighted that Digital Transformation is a journey and it's still in its early stages. And I have to agree with him, a lot of companies are embracing it, but we are still in the infancy of figuring out how to transform business into this new IT age.

He also highlighted that changing isn't easy, there are often organisational challenges, cultural, "old thinking" and outdated technology that hold us up on the digital transformation journey. I touched on some of these challenges in my FFUUEE blog post the other week.

He had an interesting thought that really sparked my intrigue, he mentioned that we should moving away from the old thinking of laying down IT infrastructure first and then having our application/developers build around that ecosystem. Instead we should be looking at solutions and then building the infrastructure around to suit our solutions. This is an interesting notion and one some companies are utilising as they try and understanding what integrating cloud within their organisation means. What are your thoughts on this? Are you seeing this happen within your organisation or customers?

I don't think it'll come as any surprise to hear but Barry re-enforced the idea that everything should be automated. And organisations should be looking be looking to define that strategy at a high level and ensuring that departments are collaborating together on any innovations, best practices, working practices etc ensuring that any lessons or benefits are shared. I love this idea and notion, and one I'd really love organisations try and think about more. Often, I speak to people who automating but different departments are using different tool sets so any lessons learnt or knowledge transfer is hard or even impossible to achieve. A uniformed approach is the way forward, in my eyes, organisations should be picking one or two tool sets that make sense and using them across all departments.

The next session was a customer story presented by Mark Howell from Lloyds Banking Group. Mark shared some of the lessons learned and thoughts on DevOps within his team and organisation. He highlighted how Governance was key to organisations adopting the cloud successfully.

Implementing that governance can help to demystify rumours or misconceptions that are happening within your organisation, and allow people to move forward and innovate. And I think that's a really good point, as often within large organisations old documentations, misunderstandings, rumours, can spread and engineers stop deploying a certain virtual machine size or avoid using a service because at one time it was "not allowed" but that policy has since changed. So applying Governance (in Azure using Azure Policy, Blueprints, etc) can help to clear those things up and allow people to try with guardrails in place rather than relying on information that has been shared at the tea station.

It was also really nice and heartening to hear that Mark had invested time in educating his Chief Financial Officer about Azure and certain services within it so he understood why Mark and his colleagues were asking for budget to implement these services. And this was another great takeaway, I often hear people out with the IT department blocking cloud deployments and often that's because again of misconceptions or misunderstanding so as techies we need to ensure we are educating people out with our department that are key stakeholders or decision makers so we can take deliver a cloud strategy.

This session was delivered by Bianca Swartz from Standard Bank. This session was a hidden gem, Bianca shared how she and her organisation have rejuvenated their change request/implementation processes internally to help be more agile and help empower their engineers more.

In the past they had a lot of issues with changes being rolled out and issues happening and no one really taking responsibility for allowing that change to roll out into production. So this new system helps to "reward" teams that are going through a robust process and rolling out changes that work and "punish" teams that don't. The teams that have a history of positive changes happening will ultimately have less hurdles to jump to get new changes rolled out. Teams that don't have a great history need to go through the end to end process to roll out their changes. So it's a trust model.

I really love this idea and helps to create a working practice within an organisation. Good practices for rolling changes out to your production environment is encouraged.

Bianca mentioned that they are hoping to open source their approach and help other organisations use it so that is something I eagerly await.

This session was co-presented by Trevor Hess and from Chef and Eugene Chuvyrov from Microsoft.

For me this was a super exciting and informative session covering off how the two companies have worked together to help develop a tool that can help deal with some of the End of Support issues that organisations are facing given that support for Window Server 2008 & R2 goes end of life in January 2020 (and let's not forget support for SQL Server 2008 ends in July 2019).

Making use of Chef's Habitat software they have written a script that can scan servers within an organisation looking for specific characteristics, in this case for Windows Server 2008 servers that host .NET applications. It then looks a the application and pulls it out of that 2008 environment and packages it up separate from the operating system (OS) and then it can be deployed on, another Windows operating system, 2019 for example.

The example that we were walked through was a web front end app with a SQL back end and using their tools they were able to extract the app from the OS, move it to a server instance in Azure and migrate the database to a Azure SQL Managed Instance. They were also able to update the app to connect to the new connection string for the database. This all took only a few minutes and made use of Azure DevOps for source code and deployment pipeline capabilities.

Another example we were shown was taking the same app and packaging so it could be deployed on a container, again Azure and Azure DevOps were utilised to help with this.

Now I've slightly over simplified that there but the premise is there to help people decouple legacy apps that aren't necessarily available for modernisation because the source code isn't there or the skills/time/money don't exist to re-write. From the demo it seems like a simple process that could help organisations that aren't prepared for the End of Support dates deal with their legacy apps and operating systems in an effective way. The script/tool is available for anyone that has a Chef Habitat license. So if you are an organisation who heavily utilise Chef and have a bunch of old Windows Server 2008 servers and apps in your organisation speak to your Chef team and ask them to investigate this offering more.

There Is No Planet B: Minimally Distributing Your System With Habitat

This session was delivered by Blake Irvin from smartB. smartB are a company focussing on provide people with data to show them their energy consumption to try and give them data to help reduce their carbon footprint, as in the title of Blake's session there is no Planet B.

Now I am not someone that talks a lot about climate change and I am not perfect in how I interact with our planet. I use plastic and leave electric items on when I'm not using them to often. But I do try and do my bit for society. And I'll be honest, I never thought about how we as IT professionals in our working capacity can have a positive impact on the environment.

Blake shared a slide that said a 1,000-watt server generates 1 kilogram of CO2 every hour. And that its forecast that electricity demand for information communications technology (ICT) will accelerate in the 2020s, and that data center will take a larger slice.

He shared this slide with data about the forecasted energy usage within IT: 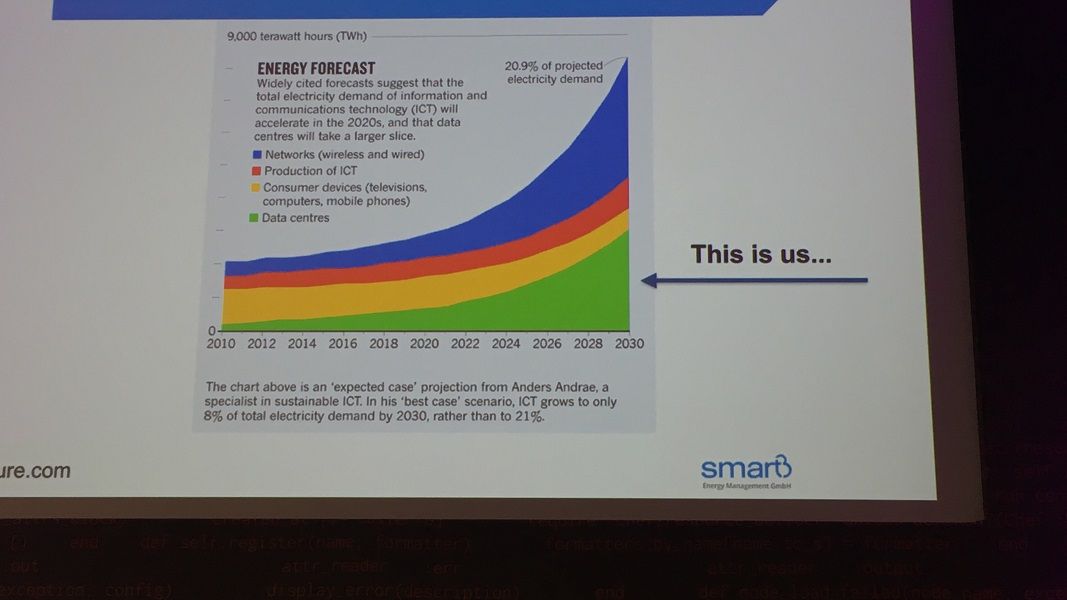 His message was, as IT professionals we should be looking to drive efficiencies when we deploy systems, not over speccing systems, driving optimisation where we can, looking to take advantage of automation technology to switch off and switch on things when we need them. And overall, just be mindful of what we are doing as IT professionals and having a positive impact where we can.

I throughly enjoyed attending the first day of ChefConf London 2019, I unfortunately had a family thing that clashed with the second day but it was a really worthwhile event and I've left with lots of ideas and follow up questions. The IT community really is a great one to be a part of. 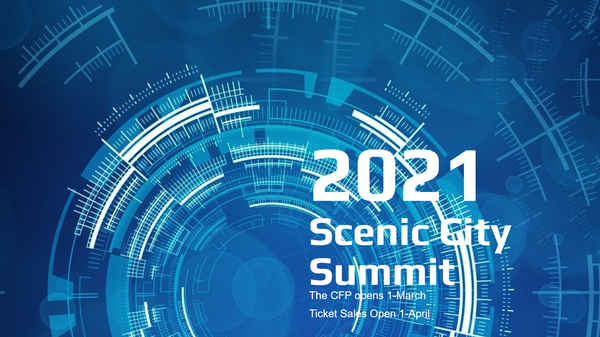