Yesterday I attended the first Unified Communications Day at the National Motorcycle Museum in Birmingham, and I must say it was a very worthwhile event to attend. _

The event was the brain child of Andrew Price and several of colleagues and it's goal was to bring together like minded people in the hope of networking and sharing knowledge on Unified Communications (Exchange/Office 365/Skype for Business) systems.

The UC Day team had managed to gather some very recognisable and well known names to attend and speak at the event as well as attracting the support of many big name companies to sponsor the event.

Attended the event for me meant a trip down south to Birmingham, but as the event venue (the National Motorcycle Museum) was only a 10 minutes taxi ride from the airport it was very accessible.

On arrival we collected our lanyards and badges and gathered for some pastries and coffee to start the day off, it was a nice way to ease into the day by catching up with old colleagues and friends also attending the event. The keynote speech by Andrew Price and Ian Woolner from the Microsoft Skype team. There was a nice buzz to the opening session of the day, you could tell that everyone was excited about what lay ahead.

Once the keynote was finished we all broke away to our sessions. There were three conference rooms dedicated to sessions throughout the day, one for Skype for Business, one of Office 365 and lastly one for Exchange. I chose to head to Steve Goodman's "Exchange 2016 Hybrid – Getting it right first time" session. Having followed Steve on Twitter and read many of his blog/tutorial posts over the years it was a nice chance to get to meet the man in the flesh and hear what he had to say. His session was very informative and gave a very good overview of what to do and what not to do in regards to a hybrid setup.
My second session of the day was Gary Steere's "Troubleshooting AutoDiscover and Availability in Exchange and Office 365" session. One of the best sessions of the day for me, Gary took the Autodiscover right back the basics and gave us some useful insights and tips on how to troubleshoot and set up Autodiscover within Exchange.

After a well deserved lunch break I chose to attend Justin Harris's "So You Think Your Directory is Ready for Office 365?" session. I came out of the session a little disappointed as I don't think the session went deep enough into the topic for the audience that attended. It was billed as an Intermediate session but I was still left a little wanting from it.

My next session was with Dave Stork on "Tooling Your Exchange", unfortunately the Demo Gods were against Dave during his session but none the less he pointed out some really good tips on troubleshooting Exchange and listed some great resources to use.

The penultimate session of the day for me was Michael Van Horenbeeck's "Exchange Hybrid Inside and Out" session. Michael is an energetic speaker and had the audience really engaged. He was struggling to cram all his content into the 45 minutes he had but he crammed alot into that session. Definately another session for me that was worth travelling for.

Nick Parlow's "Be Smart, Play Dumb; Exchange Design and Operations for Shared Services" session was the last of the day. Again Nick is an engaging speaker and had the audience intrigued with his knowledge and witty banter.

I feel the event was very worthwhile. I thoroughly enjoyed being able to learn from people who I regularly follow and use as mentors via Twitter and blog posts. It was also nice to get a chance to meet up with old colleagues and discuss issues and woes we have with clients, technology and life itself. The event was extremely well organised and laid out by Andrew and his team, here's hoping they will be able to organise the event again for next year and even more people make take the time to support it. We definitely need more events like this in the UK, there is an active and dedicated community willing to get involved and support events like this without a doubt. It's just a shame that there is a lack of woman within the IT community, would love to see some more females rolling up their sleeves and getting involved in the technical aspect of IT. 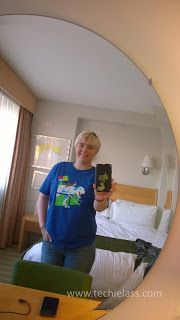